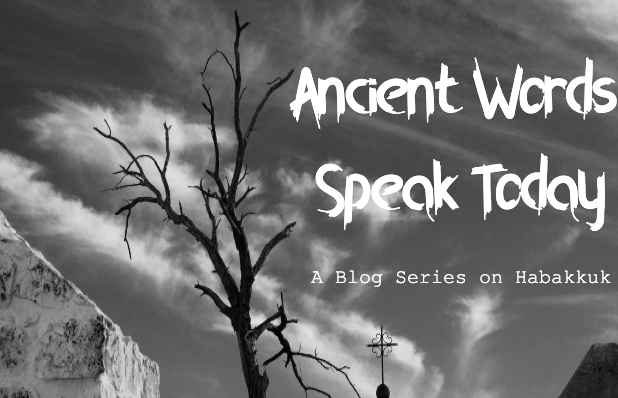 This article will focus on the section of Habakkuk entitled “Woe to the Chaldeans” (Habakkuk 2:6-20). By now the plot of Habakkuk should be clear to us. God has chosen an evil army to administer justice against the evil actions of Judah. Habakkuk is amazed that God would use such a vile nation to punish the less vile Judeans. However, God tells Habakkuk to trust him and Habakkuk does just that.

Habakkuk 2:6 is a series of five woes. What follows is a scathing rebuke of the evil Chaldeans and their godless ways. In essence, God confirms his attributes of purity and holiness that Habakkuk had referenced back in 1:12-13. Habakkuk’s second complaint stemmed from his surprise that God would use an evil nation to fulfill his purposes. In Habakkuk’s mind, it made more sense for the entity who administered justice against Judah to be morally superior.

In the five woes, God condemns those who take what is not their own, who get evil gain for their homes, who build towns with blood, who exhibit wrath towards neighbors, and idolaters who place their trust in useless metal idols. Verse 8 says, “Because you have plundered many nations, all the remnant of the peoples shall plunder you.” The destruction of the Chaldeans will entail a disastrous response from the victims of their relentless greed and bloodshed. Judgement was to come upon the Chaldeans (v.16) and such a judgement made sense given who we know God to be.

While the use of an evil army might seem odd, we can find a similar strategy in God’s use of the Assyrians as his “rod of anger” in Isaiah 10:5. While God would use Assyria to punish Israel for her terrible sins, he also promised to punish the haughty and arrogant king of Assyria (Isaiah 10:12). It is clear from both the Assyrian and Chaldean accounts that God is sovereign and controls the fortunes of all nations. God will achieve his will in a way that does not violate his character even if it does not seem right in our eyes. This was exactly the predicament faced by Habakkuk before he declared his faith in God and trust in his salvation (Habakkuk 3:1-19).

For those of us living in the USA today, the last few years have revealed a rapid descent into depravity. Even though the sexual revolution took official status during the “hippie” years of the 70s with the subsequent decades continuing that hedonistic trend, the last 3-5 years have truly upended the notions of good and evil. Homosexuality is being increasingly normalized with gay characters being portrayed in children’s movies and TV shows. Abortion has been incorporated into the official platform of the Democratic party along with a host of other Romans 1 sins. Child gender dysphoria is being praised by presidential candidates and a film that sexually exploits children is being distributed on a major streaming service.

Major Christian institutions appear to also be disintegrating. American evangelicals (41% by a recent survey) contend that a good person can earn a place in heaven, 43% maintain that Jesus sinned while he was on earth, 44% claim the Bible is ambiguous in its teaching about abortion, and 34% reject the idea of legitimate marriage as one man and one woman. I know from personal experience that the gospel is not being preached clearly in many pulpits which only results in many people having a false sense of assurance that they are on the “right side” of God’s judgement. We must plead with these people and pray earnestly that they are given the gospel before it is too late.

In a sense then, true Christians are seeing evil pervade both the secular and spiritual realms. We may be asking when God’s inevitable judgement is coming and which instrument of wrath God will use to administer justice. We also must acknowledge the USA is one of the least evil nations extant today. In fact, there is no nation that is significantly better. As wise sons and daughters of God, we must affirm that the USA has entered into a state of depravity that exceeds anything in its past. We also know that God does judge nations for their evil actions. We can look to Habakkuk to see how God has dealt with evil nations and people in the past and find solace in the fact that God is ultimately in control. On a final note, we must acknowledge that God is fully able to turn the tide of evil in this country. However, we cannot expect that to happen if the church does not remain pure in its life, calling and teaching.

Rethink How You Go

Join us Sundays at